Homes around the world have been invaded by coloured loom bands; small coloured rubber bands that can with patience, be intertwined to create a range of jewellery and accessories. As floors become littered with these bands, how can loom bands demonstrate data management principles?

First, loom bands, like data, often form an unorganized and unstructured collection (Figure 1) in which it is difficult to locate the band (data) that you need. It is also difficult to answer specific questions such as:

o   How many blue loom bands do I have? 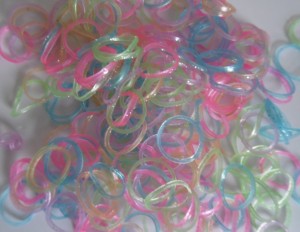 Second, loom bands, like data, can be organized into categories based on a specific attribute of the band, such as colour. This forms an organized collection.

Third, as loom band experts will know, there are also different types of loom bands, such as striped, polka dot, glitter, two colour tone and luminous. Decisions therefore have to be made about how to organize the collection, such as by colour, type, or type and colour. Similarly decisions have to be taken about how to structure data.

Four, the loom band culture has its own terminology, such as cap band, single chain, double chain, ladder, and fish tail. Defining terms and understanding how different communities define data are key problems in information management. 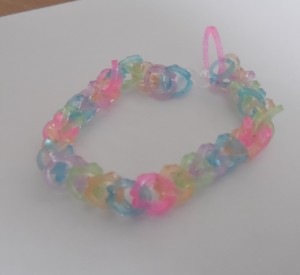 Six, as celebrities and members of the Royal family join the estimated 1 in 3 people wearing loom band accessories, the flexibility of loom bands and creativity of individuals has led to the creation of loom band clothing, handbags, hair accessories and 3D figures. Data can be combined in different ways to produce different types of information to meet different needs.

Eight, with the number of loom bands in circulation equalling levels of big data, concerns have moved to the risks associated with them. Reports include cases of injury to humans and wildlife, in addition to environmental concerns; recycling opportunities are being investigated to divert mountains of loom bands from landfill sites. Similarly, a range of risks are associated with the security of data, and issues of retention and reuse are being investigated.

Loom bands are a simple resource that with time, thought and skill can be used to construct intricate colourful designs that have had a powerful impact, touching the lives of everyone from children to celebrities. Data are a powerful resource that also has the power to have a positive impact on the lives of many. If data are effectively managed, and attention is given to reuse (avoiding the loom band landfill) intricate relationships between data can be visualized to create valuable information.