Within these two extremes, further categories can be identified. For example, quoting or paraphrasing the work of another are legitimate means of expressing the ideas of someone else and acknowledging the original ownership of the ideas.  Figure 1 presents a taxonomy of declared information ownership. 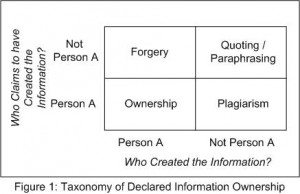 Replicating the work of another is established practice in some disciplines as a method of learning; for example, an apprentice may seek to reproduce an art work of their master. Deceit only arises if at a later date the ownership of the reproduction is mistakenly attributed. The difference between replication (seeking to imitate) and reproduction (following the same process) is discussed here: http://politicalsciencereplication.wordpress.com/2013/02/24/is-there-a-difference-between-replication-reproduction-and-re-analysis/